The Social Golf Course was written by Zeb Welborn and John Hakim. 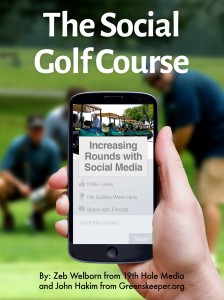 In Episode 68 of the Defining Success Podcast we go through our book chapter by chapter and discuss the ideas presented in the book.  At the end of each chapter we present a question in our book, which we encourage readers to engage with on our website, SocialGolfCourse.com.

Chapter 1: The Death of the Traditional Golf Course. When I think of the glory days of golf, I think back to the time my grandfather played the game as the men’s club president at his local golf course.  The times have changed and we must think about the game differently. The local golf course must take the responsibility for developing and enhancing their local communities — online and offline.

Question: When were the glory days of golf?

Chapter 2: An Industry in the Rough Golf has been in decline since 2005.  It’s been a scary time in the golf course industry with more courses closing than opening and the outlook doesn’t look pretty.  Golf courses need to take a much more active role in promoting the game.

What is the biggest problem facing golf today?  How can we fix it?

What are some interesting ways you’ve seen golf courses market themselves? How do/would you market your golf course?

Are tee time wholesalers good or bad for the golf course industry?

Chapter 6: Marketing in Today’s Economy Effective marketing methods change all the time.  Right now, social media is outperforming all other forms of advertising methods.  We all must learn how to market effectively as technology is changing the way we live and the way we consume information.

What is the future of marketing in the golf course industry?

Chapter 7: The Golf Niche Golfers are really easy to reach through social media.  Targeting features on different social media platforms offer a great opportunity to connect with your target market.

Who is your ideal customer? How can you get them?

How has social media impacted your relationship with your customers?

Part 2 will complete our discussion on The Social Golf Course.

Jay Miller loves the game of golf.  He’s passionate and has great ideas on how to grow the game for the future.  A big push Jay says that needs to be made in golf is to encourage more young people to take up the game.  By giving youth golfers more opportunities, Jay says, we can help grow the game. Attracting the youth is also valuable in business because in order to maintain the longevity of a business you have to be willing to attract younger generations that will one day fill the role of different age groups.  By learning how to build a business focusing on the youth, we can help build better businesses overall.

Jay Miller was the past President of the California Golf Course Owner’s Association, Founder and past-CEO of one of the most successful non-profit golf foundations in America,past General Manager of the National Golf Course of the Year, Golfer’s Association’s “Man of the Year” and is currently the Director of Business Development for Golf Card International and Fairway Rewards.

Jay got started in golf at Edgewood Country Club when his parents let him hit his first shot at a young age and knocked it close.  His parents immediately got him a set of clubs and got in touch with some golf teaching professionals who taught him the game.  He eventually gave up all the other sports he played to become a golfer.  He started working at a local course and he went to Purdue University on a golf scholarship where they won the Big 10 Championship in his senior year.

Jay tried to become a professional golfer but realized he wasn’t good enough to make it and so he quit playing professionally but started his own business.  The man who sponsored him on tour owned the largest manufacturing facility of plaques and he jumped into the business.  The first year he did the Betty Ford Center in Palm Springs and got to play golf with Gerald Ford.  Betty Ford went on Good Morning America where she talked about Jay and his business which gave his beginning company a huge boost.

He was doing donor recognition wall displays across the country and offered a bunch of new products until 2001.  He was playing 160 rounds of golf.  In 1986 he had a dream about changing children’s lives and he wrote a 72 page thesis on how to grow the game.  A good, wealthy friend of Jay took him golfing and asked Jay what he would do with money if his friend were willing to give it to him and Jay said he would start an organization to teach young people the game of golf.  A couple years later his friend gave him $3 million dollars to start Jay’s project.

His wife named the project “Get a Grip.”  Get a Grip on your life, education, the golf club and the Lord.”  They were named three-times the National Junior Golf Education Foundation of America.  They had one location called Cresta Verde Golf Club in Corona California.  They built an education center at Hidden Valley Golf Club.

Jay took over Hidden Valley Golf Club in 2007 and became the National Golf Course of the Year in 2011.  Jay went down to Florida where he managed a few clubs and did some consulting for other golf courses.

Jay is addicted to the game of golf and has probably played over 16,000 rounds of golf at 700 golf courses.  He got hooked on hitting the cool shots.  He loves the camaraderie  the fellowship, and talking smack with your buddies.

His purpose is working in a program called Mulligan, connecting golfers to God.  The famous Wally Armstrong, Jim Hiskey who invented Bible study on the PGA Tour.  He loves helping golfers enjoy the game and grow the game.

Single mothers don’t have the time, energy or resources to introduce their children to the game.  Some parents are spending $20,000 a summer in an effort to get their children a golfing scholarship.

According to Jay, $100 million has been spent on the First Tee Program which offers money to inner city youth to take up the game and the program is failing.  Because many inner city youth do not go on to college and therefore can not afford to pay for golf at a later age.  Jay suggests we raise $10 million a year to get students started playing the game in preschool.  They get preschool teachers to learn how to teach golf and the instructors can teach preschool teachers in around 5 hours.

If you love golf then you should introduce others to the game.  Donate clubs and balls to juniors.  Glen Ivy in south Corona gave Jay close to 12,000 golf balls to give to young players.  Jay encourages golf courses to give youth the opportunity to play the game in any way they can.  If all golfers could have a philanthropic attitude we can all help grow the game.

Jay has gotten to play with two U.S. Presidents, many celebrities, many professional golfers at hundreds of courses.  Jay feels he was created to change childrens lives through the game.  He wants to improve their game, make them feel important and give them a product that was a good value for their money.

The top golf stories Jay ever had was when he played golf with Keith Jackson and Frank Boyles, Bob, the friend who funded the get a grip foundation on a golf trip.  They spent four days at Augusta National and and Shoal Creek. The opportunity Jay had to spend the trip with two legends in the game of football was one of Jay’s most memorable golfing stories.