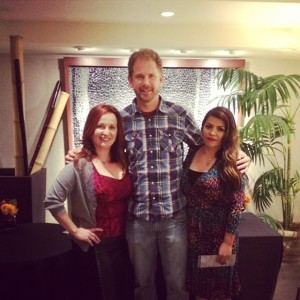 Olga Mizrahi is the author of Sell Local, Think Global: 50 Innovative Ways to Make a Chunk of Change and Grow Your Business.  In Episode 109 of the Defining Success Podcast, Olga and I discuss the value of a social share and how impactful it can be to businesses everywhere.  On this Happy Thanksgiving week, let’s be appreciative to all of those people who take the time, effort, and energy to share our stuff!

Olga Mizrahi is a mother.  She likes to bike, ski, and blown glass.  She operates firmly between the right and left brain.  She loves fantastic design, but she loves measurable results even more.

She’s been working with small and medium-sized businesses for more than 15 years, both online and off.  In her blog, she works to help move your business forward and allow you to cash in on your own chunk of change and not immobilize you because that change is so big.

She’s also the author of Sell Local, Think Global:  50 Innovative Ways to Make a Chunk of Change and Grow Your Business.

Olga started out as a professor of website design at the age of 24.  She quickly moved to the private sector, but realized that wasn’t her passion.  What she learned in the private sector was the importance of A/B Testing.

She then started her business Oh So Design which is now in its 10th year.

In Episode 108 of the Defining Success Podcast, Ellory Wells shares how he lost his job and took up a career in online marketing.  Learn about his transition and how he’s living in a world that’s  transitioning from scarcity to abundance.

Ellory Wells was born and raised in north Texas. He loves technology, gadgets, cool toys, video games and movies. He often writes his blog posts while sitting on my back porch overlooking nature and the golf course.

In addition to writing and coaching, he enjoys reading, watching TV and movies, playing golf and spending time with his wife.

Ellory Wells has a blog, a podcast – The Empowered Podcast, he provides one-on-one coaching, he organizes a a mastermind group and wrote a best selling ebook titled, How to Start Your Professional Podcast for $200 or Less.

In his one-on-one coaching, Ellory helps his clients get clarity.

Our world is shifting from scarcity to abundance.  Ellory believes the world used to be more cut-throat, but in today’s innovative society, there is room for everyone to grow.

Entrepreneurs often spread themselves too thin and Matt Wilson shares how that was one of his biggest mistakes.  Learn why you shouldn’t chase squirrels in Episode 107 of the Defining Success Podcast.

At 28 years old, Matt’s been able to do some pretty remarkable things including running a successful business, traveling the globe, and interviewing Donald Trump.

Matt Wilson is co-founder of Under30CEO.

If Matt is around he will be easy to spot as his long luxurious hair is generally flowing freely in the breeze.

Matt Wilson is the founder of Under30CEO and is now in charge of the Under 30 Experiences.

Matt got started in business at an early age by creating his first lemonade stand at about five years old.

Once Matt graduated college and was looking to secure some venture capital for his business.

Since 2008, Under30CEO has been blogging regularly including interviews with some of the most influential people in business.

The first thing you should check out is the Getting Started page on Under30CEO if you were to visit their website.

Under30Experiences is connected with Under30CEO, but is focusing on traveling to great places all over the globe.  Some trips have been to Bali, Iceland, Ireland, Nicaragua, and other places.  These excursions last between 5 and 7 days.

David Frood developed The Thinking Corporation corporate innovation program. He worked for sixteen years as a consultant to medium and large businesses, initially with an international sales consulting firm, then as a freelancer.

His experience formed the basis for The Thinking Corporation book after observing many highly skilled and knowledgeable people who were frustrated by the boundaries and structure of their employer organizations. Employees would rarely tell their employers about ideas for new products, services or markets to improve existing processes.

It became clear to David, that there is a much better way to manage people and organizations through designing a company that is capable of harnessing the talent from within the ranks.

David Frood started out in accounting and eventually became a sales consultant.  In David’s experience, the biggest problem many corporation has is not talking and listening to employees enough.

Corporations will benefit from becoming a Thinking Corporation because they will increase their profits from the ideas of those connected with the corporation.  The individuals can benefit in a variety of different ways that they work out with their corporations when they sort out the program during the process. They will be capitalizing on great ideas.